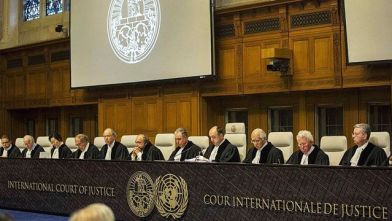 These days Ukraine has finally brought to court in Hague Russian Federation as an aggressor and supporter of the terrorism. Ukraine is asking the International Court of Justice, the United Nations’ highest court, to fine Russia for “intervening militarily in Ukraine, financing acts of terrorism, and violating the human rights of millions of Ukraine’s citizens. Russia is predictably acting as usual – calling black is white and keeps assuring everyone with arguments that stand no critics.

What is happening in the war at the East of Ukraine explained by Mr. Edmond Huet, an arms expert, who has been analyzing guns, ammunition, and tactics of the invaders since 2014.

Today we have a lot of evidence about Russian aggression (if not invasion) in Ukraine. For us, Ukrainians, it is basically a war, the hybrid war on many fronts and dimensions. And still, among the EU countries, and especially in France, there is strong opposition to this fact. What is the matter, in your opinion?

France has always demonstrated a strong cultural opposition to the Anglo-Saxon world, dating back to the centuries we fought each other. Despite being a founding member of NATO, France left the integrated command in the 60’s refusing to submit the decision of using the nuclear weapons to an external center of the decision but never left the Atlantic Alliance. There is a kind of cultural historical idealization of Russia dating back to the end of the 19th century as well.

Then the French Communist Party (PCF) acquired a huge influence in the French political life after WW Two that lasted until the 80’s. Today, the “Moscow Party” as was the PCF described is the Front National and it is not a surprise since the rise of the FN began when a lot of Communists disappointed with the Social Party joined the FN. The Republican Party is sucking the tits of the Kremlin, helping whenever they can Putin’s Russia to appear as respectable in French eyes, defenders of Christianity, fighters against terrorism, often espousing the FN political views. Finally, the influence of Moscow is increasing in the political and cultural fields with the help of RT, the recruiting of Russian descent French, the hiring of USSR specialists in blind love with the “Russian World”, that help spread the Kremlin’s propaganda.

There are some opinions that Russia has been planning illegal annexing of Crimea and military campaign in the East of Ukraine many years in advance (before 2013-2014). Were there any indicators of that?

It is clear that such operations have been prepared since the turn of the century and are part of the Russian doctrine of Hybrid War. The war against Georgia was a rehearsal and demonstrated the need of improving many sectors of the Russian Federation Armed Forces, the lack of coordination between branches of the Army and the Air Force as well as the necessity to acquire and develop amphibious forces that lead to the order for the French Mistral-class ships.

What made you, as an expert, realize that it is not just a group of “miners and farmers” at the beginning of this conflict?

It was clear since Spring 2014 that the Russian Armed forces were behind the so-called separatists, and except Donetsk and Luhansk that received the largest part of the Russian soldiers, the attempts in other cities all located on the left bank of the Dnipro miserably failed. The units have all been identified by various groups working on Open Sources Intelligence (OSINT) began to identify units from everywhere in Russian Federation, helped by the members of Vkontakte who were bragging about their presence in Ukraine and how they were fighting the Ukrop. Their leaders are well known and identified Russians working for various RF services like Girkin/Strelkov and so many others.

There are many discussions about kinds of weapons spotted in the war zone in Donbass region. What is your opinion on the equipment of the separatists? Could you spot some, maybe, new models or modifications, something totally new? 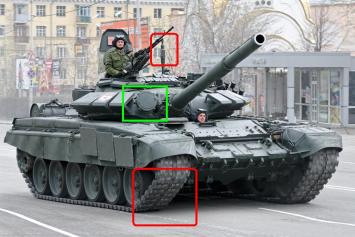 You can start with those men spotted in Donetsk and Luhansk in April 2014 wearing helmets and Battle Dress Uniforms that were adopted the year before for a new rapid reaction force unit, carrying light machine guns PKP and not the ubiquitous PKM of the Soviet Union era, optics and accessories never used by the forces of Ukraine. Captured and destroyed T72 and T64 have been found to have been updated and modified in a way only RF forces did, batteries produced a few months before their capture being produced in a Saint Petersburg factory were recovered from these MBTs, hull frames being identified as belonging to batches delivered to Russia’s units. Again, the T-72 V3 (third upgrade) is present only in Russian armed Forces and so are many other different vehicles.

How many countries, theoretically, could produce such weapons?

For light weapons, it is easy to identify their origin, version, and date of manufacturing. It is the same thing for armored vehicles, Infantry Fighting Vehicles, Radio communication jamming equipment.

Russians, explaining where the terrorists are getting weapons from, keep on claiming (almost literally with a smile), that all those equipment is a trophy or taken out from mines. How realistic is that?

I tell you with a smile that when the Russian channels air panoramic views of the Russian positions that allow reading the manufacturing lot of ammunition crates, we have all the evidence we need to demonstrate they come from Russia.

Moving from the quality to numbers. The quantity of weapon, that terrorists possess in Donbas, is unbelievable, what can you say about this aspect? We know that some European countries do not have that amount of military production.

A group of so-called separatists is fighting for 3 years a war with an estimated number of 700 main battle tanks, 1100 to 1300 Infantry Fighting Vehicles, a few hundred self-propelled artillery and other types of howitzers, that amounts to more fighting equipment than Germany, France and UK can line up — and they found it in roadside markets?

What infrastructure do you have to get, so you can service and fuel the vehicles?

A huge logistic is necessary and the “humanitarian convoys” were not enough. That is the reason Russian Forces entered Ukraine in August 2014 when their forces were repelled and seized the Debaltseve area so they could use the railroad in order to bring all the necessary goods for such a war.

Another feature that can point out on a regular forces is the way they act: command, a structure of units, tactics and so on. What is your expert opinion on separatists tactics?

From various talks I had with fighters, it is pretty clear when they face attacks, that some units are professional Russian soldiers, some are trained mercenaries led by career Russian officers and the last category is composed of people without much military experience (this category is disappearing gradually).

One more worrying direction is Crimea, which now is basically turning from a resort to a deserted military base: people are forced to move out by many threats, more soldiers and arms are there. What is your opinion on placing nuclear weapons as a mean of threatening?

Russia claims this illegally annexed territory as part of Russian Federation, no surprise they place nuclear weapons capable means there, like in Kaliningrad and let a doubt subsists about the nuclear heads presence.

We hear about placing training camps in Crimea and neighboring Russian regions. As an expert, can you see some indicators of that? How reasonable is it from the military point of view?

Russia plays by the book, the revised soviet book. This is part of the doctrine.

What are the main scenarios of the war in the East of Ukraine in your opinion? 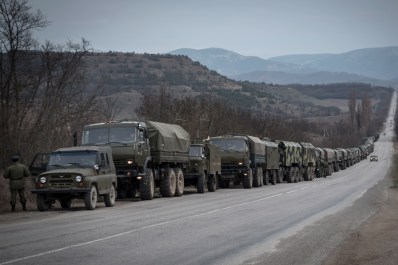 We are facing a hot frozen conflict, the needs remain for Russia to seize land corridor to Crimean Mariupol region. The hybrid war will be pursued to weaken Ukraine and detach the country from its western supporters.

What steps should Ukrainian side undertake now, what are the most urgent problems?

Fighting corruption that weakens the country, launching production of small arms ammunition, since Soviet Union era stock dating from before the independence are being depleted and some calibers are not readily available on the international market. If war escalated to a full-blown ground war, rifles without cartridges are no use.

These days many foreigners came to help us to protect and put up our country, some are getting even posts in the government. Are you ready to help us with your knowledge and experience? What position or role would be most appropriate for you?

Using my experience of having designed and manufactured two small arms ammunition that received an international agreement, of having built a certain quantity of CKD AR15/ M16 rifles, having worked on a few projects linked to sniper rifles and training devices, these are points that I would like to bring to this country I now call home.

I see many projects that are making the buzz in arms sector lately, that are pure eyewash, scams, a way to funnel money to some pockets and it seems that fighting corruption, nepotism, and incompetence in this field is the key to win this war. The defenders of Ukraine are doing a great job and deserve to have the best money can buy to fight and quickly.