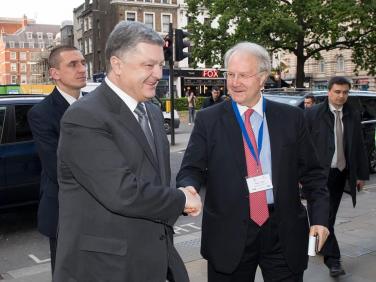 Dear readers, we are happy to introduce You an interview with Head of the British Ukrainian Chamber of Commerce Bate Toms and one of the best lawyers in Ukraine, about most critical aspects of doing business in Ukraine, political situation and further expectations.

In cooperation with UNIAN

If we are now talking about the prospects for Crimea development, we first need to get it back from Russia. Will Ukraine manage to do that?

I believe that Ukraine will. I am an optimist and there are two reasons why I believe it will. The first is that I do not believe that Russia will continue to invade another territory in Ukraine, it will simply provoke a catastrophic war with the West in which nobody’s interested. On that basis, I think that people in Crimea will understand that it is so much to their economic benefit to having their area returned to Ukraine and they will push for it the way people of East Berlin fought to join up with West Berlin. So, from the economic standpoint, all Crimeans except people in Sevastopol, maybe Yalta, and maybe Kerch should be extremely pro-Ukrainian. Secondly, I consider that there is a possibility of the solution with Russians consistent with a Budapest treaty – which is a nuclear nonproliferation treaty, the most important ever executed in the world – by which Ukraine’s borders including Crimea.

Britain is one of the guarantors under the treaty…

Its signatories are Russia, France, China, Great Britain and the United States. Undermining the Budapest treaty undermines nuclear nonproliferation altogether. I have been told by very important people in the Middle East that following the failure of the Budapest treaty they decided they couldn’t rely on international agreements for their safety and they have to continue their work in the direction of building nuclear weapons. As this idea spreads around the world we can have 40 to 50 (maybe many more) nuclear powers and if you have so many nuclear states it will be impossible to control the nuclear weapons they produce.