On September 21st a Belgium-Ukrainian Business Forum “Doing Business in the new Ukraine” took place in Kyiv. Event was organized by the Embassy of Belgium in Ukraine, European Business Association with the support of Ukrainian Ministries of Economic Development and Trade and Foreign Affairs. It is hard to overestimate the importance of this event to our country. Though the main aim was to boost economical cooperation between Belgium and Ukraine, we cannot miss the political aspect. This level of communication helps to involve our country even more to the so desirable for us European space, such interaction is also triggers the internal changes in Ukraine. The event consisted of two panels dedicated to taxation and custom legislation and regulation in Ukraine, doing business in agricultural sphere, transport infrastructure, and, of course, the reforms. Number of Ukrainian officials was also claimed as participants, but not all of them could attend the event. Among those, who were present Belgium businessmen could see and hear Oleksii Vasylenko (Head of Customs and Control Department), Olena Makeeva (Advisor to the Minister of Finance of Ukraine), Vladyslava Rutycka and Olga Trofimtseva (Advisor and Deputy of the Minister of Agricultural Policy and Food in Ukraine, relatively), Maksym Nefyodov (Deputy Minister of Economic Development and Trade of Ukraine) and Volodymyr Lapa (Head of the State Service of Ukraine for Food Safety and Consumer Protection). So, the pool was quite impressive and the expectations were high as well.

Working part that took place in the morning of that day, according to the participants’ comments, was intense, and a lot of particular problems and had been discussed there. Generally, Ukrainian officials were trying to convince potential investors in big potential of the Ukrainian economy and market, some reforms and changes were announced. Business ombudsman Algirdas Semeta confirmed positive changes as well. Few Belgium companies, represented in our country, shared their experience of work in Ukraine. General Director of Schreder in Ukraine, Kostantin Petrenko, expressed some hopes for further growth of economy and declared recovery of his company from the crisis of 2014. But it was very lonely speech of a real businessman in Ukraine and there is a very good reason for that. Later, giving the recommendation to the foreign business, 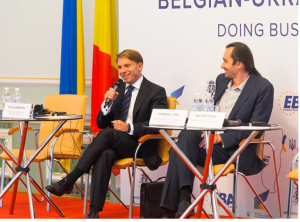 Volodymy Yarmola (Regional Manager of ACP Group) exhorted not to be afraid of going to courts. This was a really good piece of advice to the present businessmen and a “ding”. Constant legal conflicts with the authorities are an attribute if any business in Ukraine. Positive changes in the legislation, which sometimes are even much more attractive than in European countries, crash into the wall of reality. Big problems with implementation of legal norms in Ukraine – is the topic that Business ombudsman Algirdas Semeta stressed on not once. Another aspect of the reforms, declared by the officials, is that big numbers of changes are only expected to be done. The guests could hear many times from the presented at the meeting about plans for the future, and a time that is needed to fulfill all their obligations. But do Ukrainians have that time? It is very important to show to the International Community that Ukraine is going to pass from talking to acting and real results. Do we really consider the speeches of our politicians to be effective or having influence on our lives? We have some doubts about that. It was a pleasure to see young well educated, English speaking Ukrainian officials to the contrast of previous ones, but it seems the effect is not that much different.

Doing business in Ukraine is a hard deal right now. One of the biggest issues is miserable buying capacity of the population. It is not easy to sell technological solar panels, street lamps, or teambuilding entertainments, or ever good quality beer if an average salary in Ukraine is around 120 Euros per month. And when Ukrainian officials think about the investments from the outside, what sort of economic model are they building? Numbers of European companies have moved their facilities to Ukraine due to cheap labor and high qualification of the employees. This is reasonable approach and good for the business, but what about the Ukrainians? Employees have to do hard low qualification work for, in fact, not vey high salaries. Still, better than nothing. All these products after having been made here are taken away to rich countries, where people can afford themselves to buy a car, wear branded clothes and enjoy other achievements of the civilization. vinnitsa.info
Vehicle of the former Speaker of the Parliament V.Groisman

If we look through the structure of the Ukrainian exports, it is hard to find there something else than all kinds of raw materials. Investments are very important for our country and in this time even vital. It looks like Ukrainian officials are more interested in foreign investors (which, honestly, are not rushing in) than in Ukrainians. The promises and high hopes of Ukrainian officials in economic sphere, at this point, embodied only in almost triple devaluation of national currency in roughly six months period, three times higher bills for the utilities and dozens of new Range Rovers at the official’s parking. 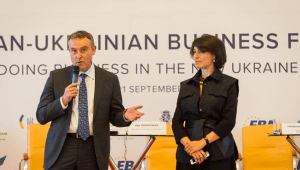 Nevertheless, Belgium-Ukrainian Business Forum is a very important event and a good signal to our country. We have to say thanks you the Embassy of Belgium and personally to tireless Mr. Luc Jacobs for his activities, as well as to the EBA, which did a huge job to set up an important dialogue between the state and business.